The North Shore Inline Hockey League Society is pleased to offer two scholarships in 2022, both of which are dedicated to the promotion of inline hockey to assist worthy student-athletes in their desire to pursue post-secondary education.

This year we are offering both the annual Perimeter Drainage/Matthew Hutchinson Memorial Scholarship and a separate NSIHL scholarship, to be awarded in the following amounts:

These scholarships will reward excellence in both scholastic and inline hockey pursuits. The successful applicant for each award will be a Grade 12 student who has managed to balance academic achievements with successes as an inline hockey player, and who can demonstrate how they have made a significant contribution to their community and have helped to support the growth of inline hockey.

The scholarship committee must receive the following by Monday May 9, 2022 at 12:00 noon for consideration:

___ A completed application (see the link below)

___ A copy of your official High School transcript

Please note: One single application enters you for simultaneous consideration for both scholarships, however, we will select only one winner per scholarship (i.e. one person cannot win both). 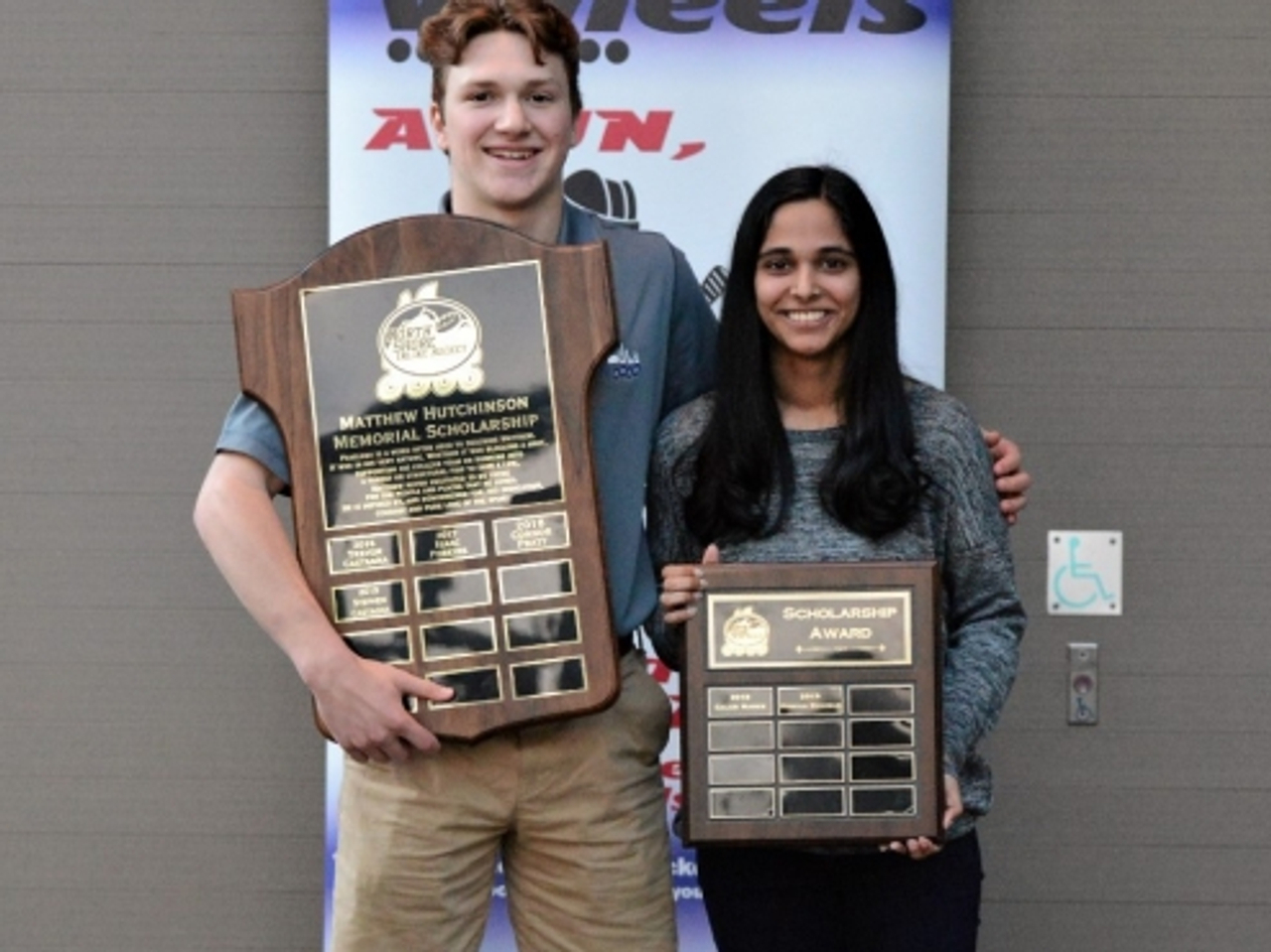 Monika Ghuman is one of the top female goalies in NSIHL history. She has been involved with the NSIHL from the youngest "Atom" division. Monika has spent countless hours at the rink volunteering her time and always making the effort to do whatever she can to assist the league. In addition to the leadership roles in volunteering her time coaching, she has helped install and remove the Sportcourt floor, organize and help run the annual swap meet, move equipment back and forth between arenas, scorekeeping, music DJ, as well as running weekly goalie clinics to assist in skill development. Outside of the NSIHL, Monika has achieved high academic standing (Honour Roll with Distinction) and is a teacher's assistant in metalwork at her high school, which has given her great opportunity to expand her leadership skills by helping younger students. Monika was selected to the 2019 Jr Women's Team Canada roster competing in the World Roller Games in Spain.

Stephen Castagna has been one of the leading scorers with the NSIHL for the past 12 seasons. He has volunteered his time during player evaluations for the past four years as well as assisting with floor installation for the past 2 seasons. He was also a coach/mentor for new players teaching them the fundamentals of skating. Stephen has volunteered for many associations outside of school and excelled at sports outside of inline hockey as well. Stephen has reffed for the association for 6 seasons and is a well-regarded official. Stephen currently plays ice hockey for the Alberni Valley Bulldogs and also recently was offered a spot on FIRS to represent the NSIHL in Barcelona in summer 2019. He is looking forward to representing the NSIHL at the highest level. We wish Stephen all the best of luck! 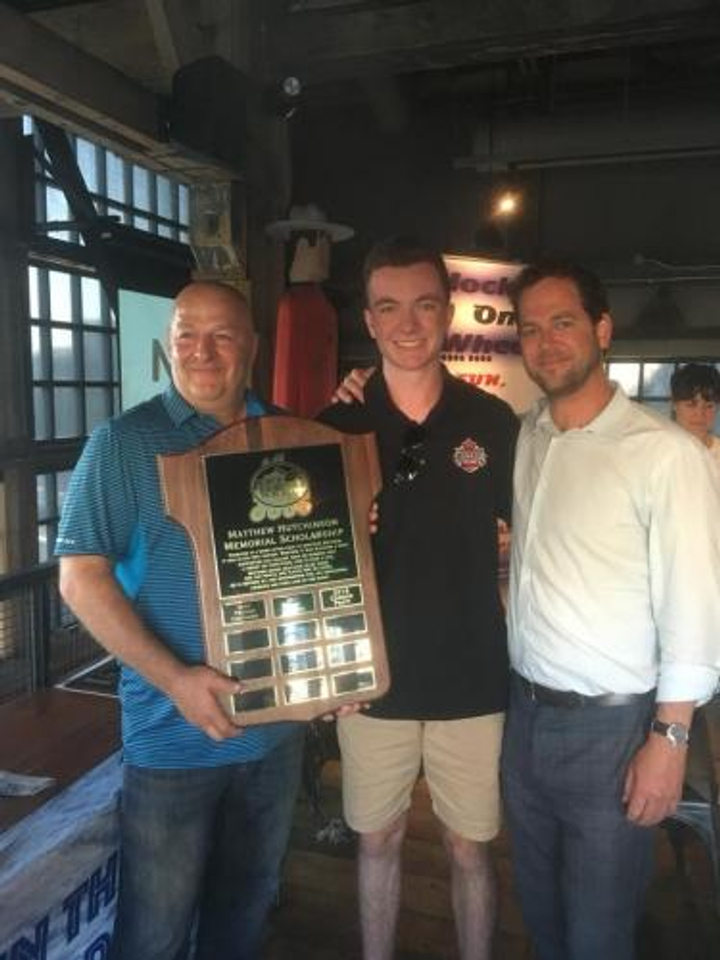 Congratulations to Connor Pratt, the 2018 recipient of the Perimeter Drainage/Matthew Hutchinson Memorial Scholarship. Connor is a hardworking, dedicated, positive role model for the young inline players he coaches, qualities reflective of the namesake of this scholarship. He has volunteered hundreds of hours coaching and refereeing inline, as a classroom assistant, and at the Union Gospel Mission. Connor has played inline for over 10 years and has represented Canada in the Junior Olympics in California and the World Inline Championships in China and Italy. Connor is training to become a Commercial Airline Pilot. 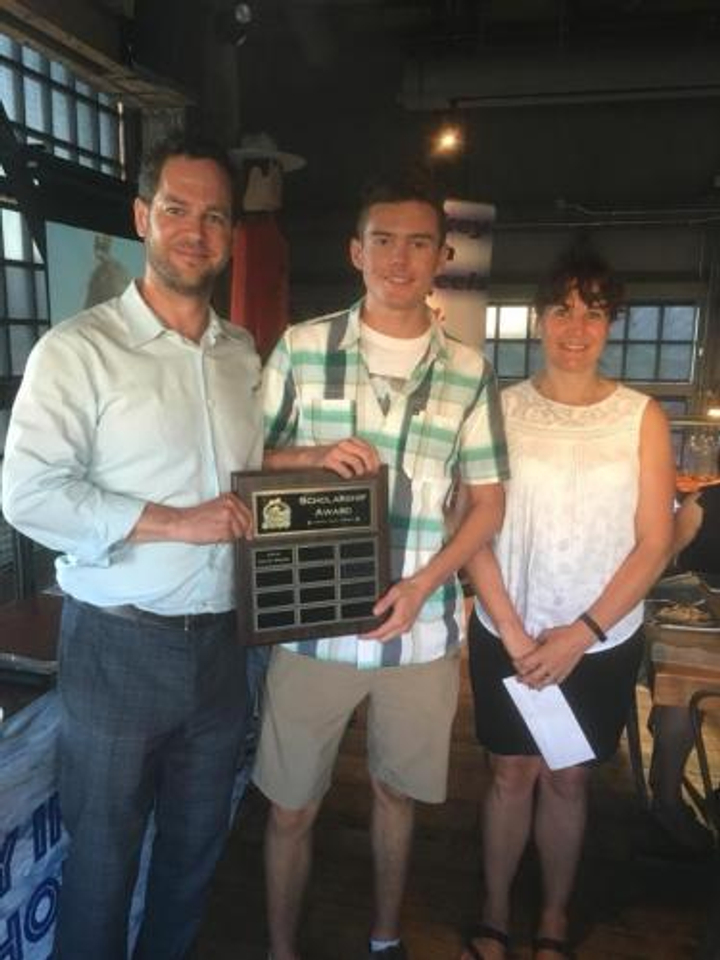 Congratulations to Caleb Magee for being awarded the 2018 North Shore Inline Hockey Scholarship. Caleb has played inline hockey for over 10 years and represented the NSIHL at many NARCH Regional and National competitions. He has been a three-time member of Team Canada, China (2017), Italy (2018) and won a Gold medal at the AAU Jr. Olympics in California. He is an outstanding teammate and models game play as it should be. He has volunteered as an inline coach, in the TNT ice hockey tournament and in Earth Day clean up. Caleb has successfully balanced his academics with a busy sports schedule. Best of luck to Caleb in the engineering program at UVic! 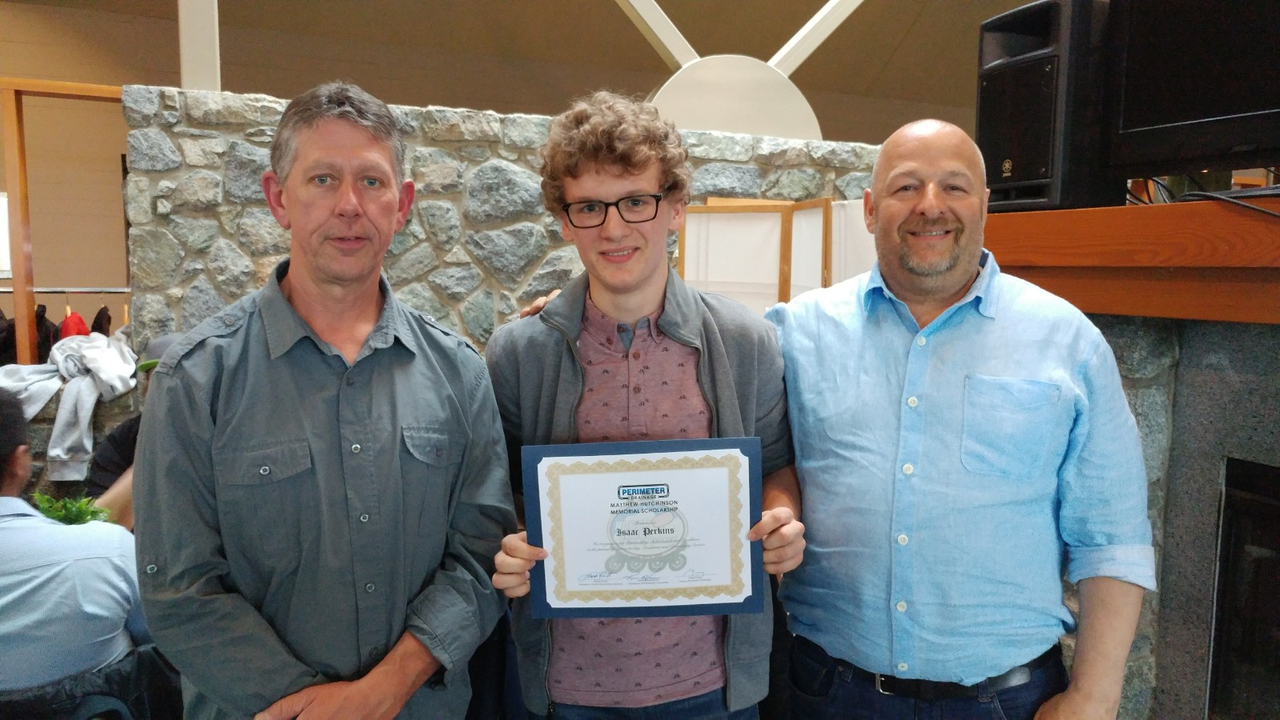 The 2017 award recipient is Isaac Perkins. Isaac represents all the applicants this season; with strong extracurricular activities, community service and leadership roles. Isaac has played in the Recreational Divisions with the NSIHL for the past 10 seasons. Given his high level of soccer though the winter months, ice-hockey was never an option for him. He definitely found his love for inline when he moved to play as a dedicated goalie in Squirt. Chris, Keith, Susan and the Inline Board all wish Isaac well for both for his first year of studies at the Gustavson School of Business (UVic), and with his tryouts for their men's soccer team. Isaac plans on returning to help coach with one of the NSIHL youth teams next season. 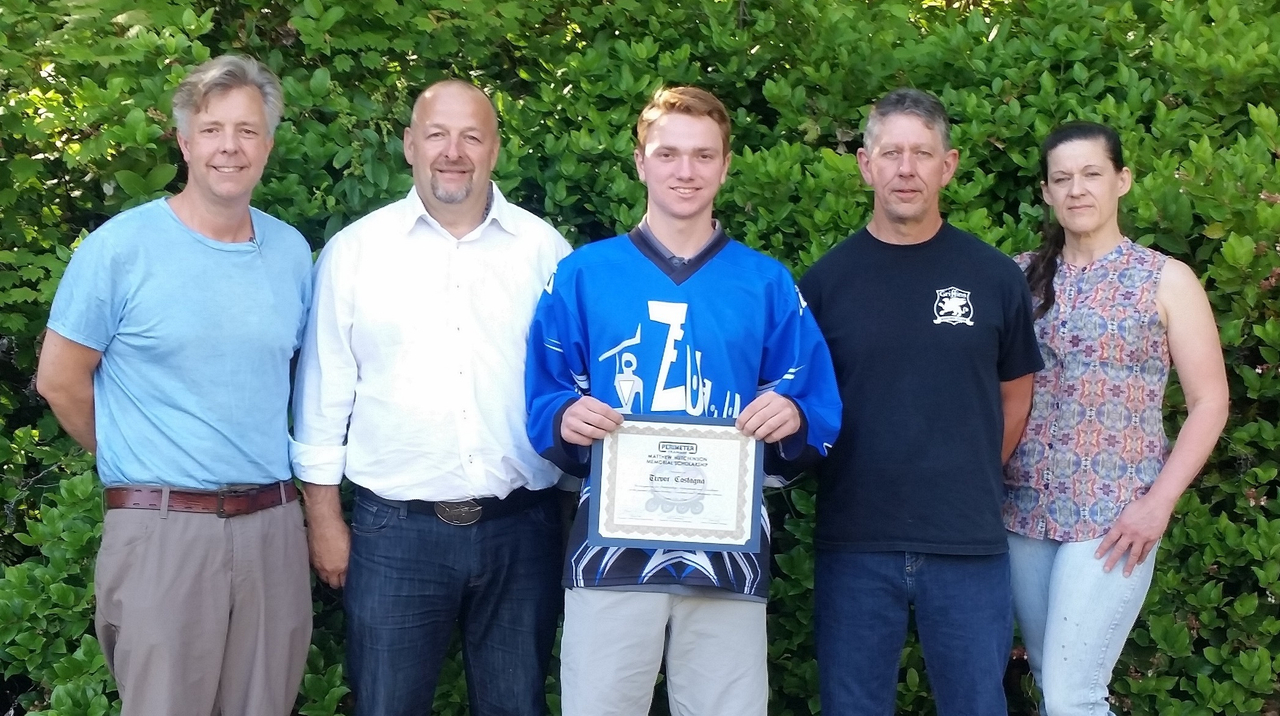 Trevor Castagna, a long time player and referee of the league, won the inaugural 2016 NSIHL Perimeter Drainage Matthew Hutchinson Memorial Scholarship award. In a tough decision with applications from many strong candidates, Trevor demonstrated a well rounded record of excellent marks, sportsmanship, and participation in multiple organizations and teams. Many thanks to all of the applicants, and best of luck at your university or career program choices. Trevor is shown here in the picture receiving the award. NSIHL President JIm Pratt to the left, Chris Gray beside and Keith and Susan Hutchinson to the right.

Chris Gray from Perimeter Drainage and the NSIHL Board would like to formally recognize this year's award winner, Callahan Brebner with the 2015 Co-sponsored Scholarship. The judging was, very tough and very difficult to choose. All applicants should be very proud of their accomplishments and their achievements both academically and with respect to their level of commitment to inline. Chris was so inspired by the number of applicants and their written submissions that he decided to increase his contribution to the cash scholarship. This year's award totals $2,500! The league wants to wish all the applicants the best for the upcoming 2016 fall school season and hopes to see everyone back and registered for their Midget Division placement next spring. 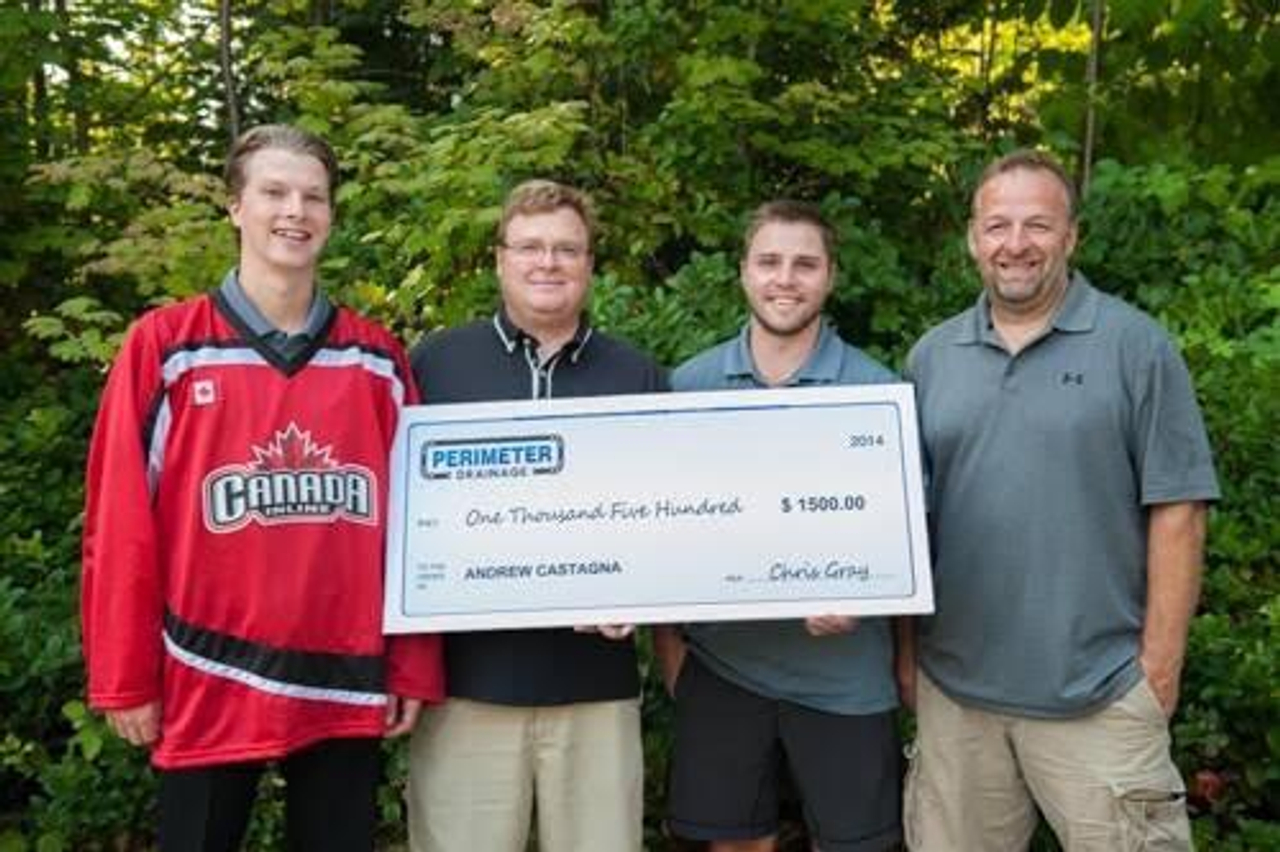 The NSIHL would like to congratulate Andrew Castagna, winner of the 2014 NSIHL $1,500 Scholarship, which was sponsored by Perimeter Drainage. This annual scholarship is awarded to a grade 12 student who has demonstrated a high level academic achievement in addition to success as an inline hockey player. 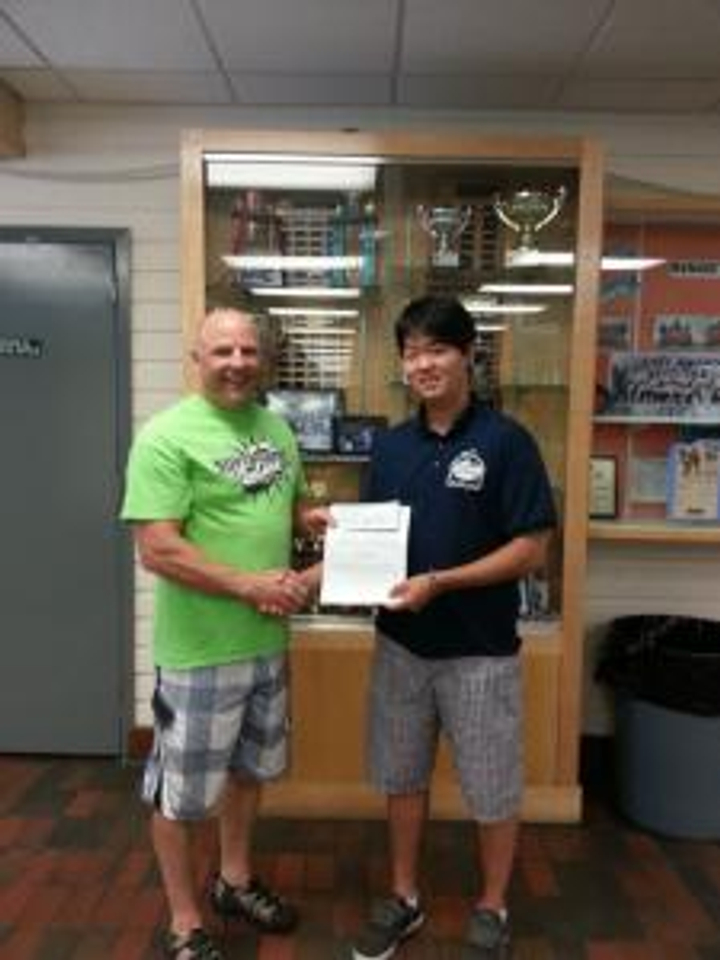 Sam Park, a long time player and contributing volunteer to the league, won the $1,000 NSIHL 2013 Scholarship sponsored by Perimeter Drainage. In a tough decision with applications from many strong candidates, Sam demonstrated a well rounded record of excellent marks, sportsmanship, and volunteerism for the NSIHL and other organizations and teams. Many thanks to all of the applicants, and best of luck at your university or career program choices. Sam is shown in the picture above receiving a cheque for $1,000 from NSIHL President Dave Randall in front of the NSIHL trophies and awards display at KMA. Once again, congratulations to Sam and everyone who applied! 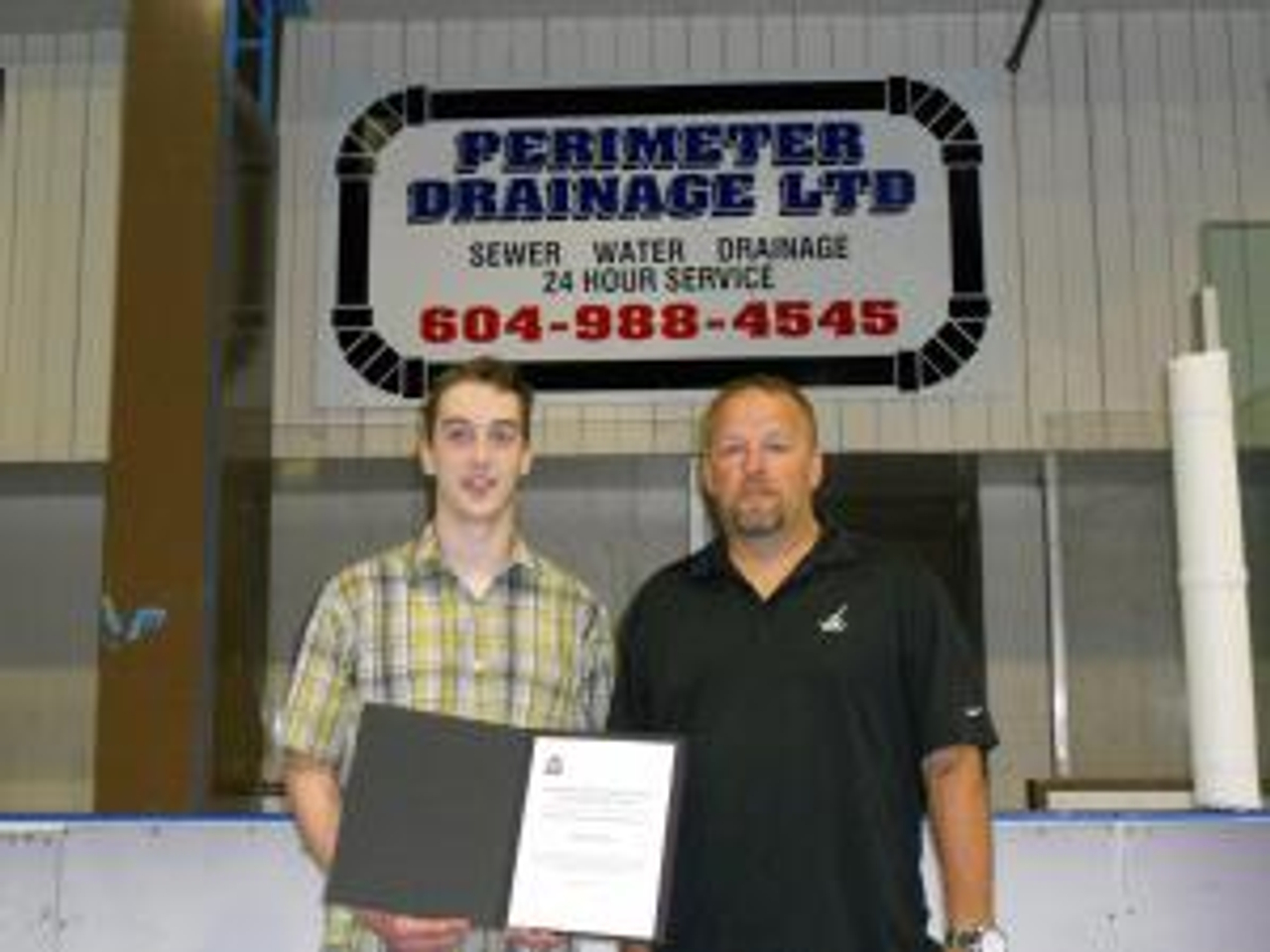 Perimeter Drainage and the NSIHL are proud to announce Aidan Ponton is the inaugural winner of the Perimeter Drainage $1,000 Scholarship in 2012. The NSIHL received excellent applications from several very well qualified applicants, making the decision difficult for the selection committee. So a hearty congratulations is due both to Aidan for his achievement, and to the other applicants. Unfortunately, only one scholarship was available to be awarded. Aidan has contributed to the NSIHL for years in many roles, including player, coach, referee, and helping with the KMA floor installation and at NSIHL events and clinics. Outside of the NSIHL, Aidan has worked hard to produce an excellent academic record while being involved in other sports and activities at school and in the community. Aidan is shown in the picture accepting the scholarship from Chris Gray, owner of Perimeter Drainage. The NSIHL would like to thank all of the applicants, Chris Gray for his generosity, and to extend our congratulations again to Aidan Ponton. Aidan will be attending Simon Fraser University in the fall of 2012. He is enrolled in the Business four year degree program. We wish Aidan and the other applicants well in their future endeavours!